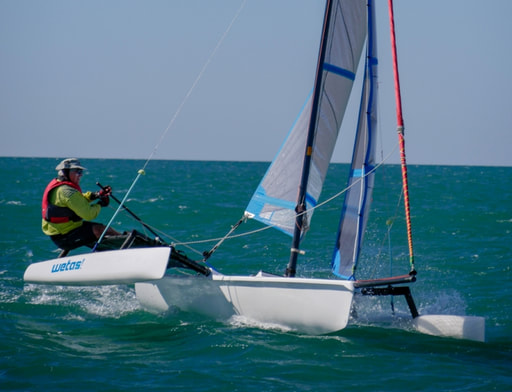 Peter Hackett at the 2020 QLD State Titles
The Weta Self Tacking (ST) Jib has not been out that long but it has gained strong acceptance already, particularly from single handed racers. As one of the “converts” who was a late adopter, I have been asked to write a review of the system, so here goes, but just my opinion.

After only a few days of watching the little car zip back and forward across my boat I would have to agree with others that this new bit of kit is a game-changer. There is plenty written about the fitting of the system so I will focus on the sailing.  I think the “busy-ness” of the Weta is what makes the ST so nice.  Three sails at the busiest times on the race course, or just tacking out of your local river for a cruise, make for a busy time and the ST just allows you to focus on everything else a little better. In our recent Qld State Championships at Bundaberg, it was blowing a gusty 10-25 knots for 6 races, so racing with the ST for the first time was a great test, here is a summary of my findings so far.

Obviously tacking is going to be the big winner here, and it was just nice to spot a chance to break away from some of the 13 boats on the course, and push hard on the tiller and jump across to the other side of the boat. You could even drop the mainsheet, and still pull off a great tack. Just ask the winner Glenn Foley how much fun we had in a windy 15-tack duel to a dead heat finish in the last race. Yes, fun!

Better still was gybing. We all know that the downwind leg is where the Weta pays good dividends to sailors following the puffs on the water, so it was awesome to just effortlessly flick a gybe and focus on pulling the kite sheet fast and take off again. You may have seen the recent videos where the lead boats are actually planing through a gybe now!
​
At the critical and often twitchy kite furl at the bottom mark I have even be surprised that when momentarily running square for a good furl, the jib will goosewing across and keep the boat moving while keeping some of the breeze off the kite.

When 2 sail reaching it is nice to just ease the jib sheet a little and have the traveller go to the widest point resulting in a nicely setting sail.

The slight reduction in sail area was a concern, but we think that the shape of the new sail is much better, removing that concern.

Any new item that makes old stuff redundant is a concern in one design boats. The original jibs will not work on the ST track, but all is not lost. As an amateur sailmaker I enjoyed the challenge of tracing the new jib on the old, and with a few cuts, 2 battens shortened, and some tactical stitching I moved the entire clew to the new position successfully. The result is certainly not as good as the new jib, but a fine sail to use for recreational sailing and even club racing, depending on how we interpret the rules.

Now the fun continues as we all investigate an individual favourite way to sheet the sail. Some are liking the single centre cleat as per the instructions, some are sticking with the cross sheeting, and some have bent the existing cleats up and are sheeting direct to the outer edge of each ama. As for the traveller control line, some of us are using it some aren’t. At this stage the rules do not allow for adjusting the car during the race, so the jury is still out on whether to keep that line for between race adjustment.

For me it is just nice to have something that adds to the fun of this cool little boat.

Glenn's planing gybe with self tacker